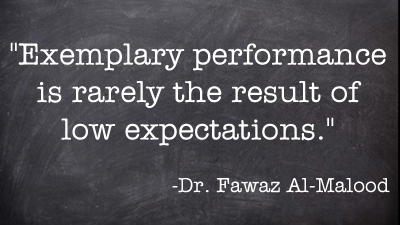 I was blessed and fortunate enough to have attended an exclusive small private college in Switzerland on a full-academic scholarship. Most of the students who attended came from privileged backgrounds.  Many were high-performing students, which was probably a good thing because this college was no walk in the park. This was one of the top five Hotel Management schools in Switzerland at the time.  Academic standards and performance expectations were extremely high. This was a school that had rules and expectations for everything in and out of the classroom. It was more like an elite military academy than a college.

We were constantly challenged, and the more that we were, the harder we worked, and the better the results were.  Our projects, presentations, papers, and even our conduct were constantly improving. I loved it!  One of the things that made it great was that many of the students would embrace the challenges and focus on how they could exceed established expectations rather than complaining about not possessing the skills or knowledge to tackle an assignment or project.

Years later, when I first began teaching, I wanted to build a program that was as rigorous and demanding as the one that I had gone through, but I was concerned that my students would not be able to handle it. Most of the students who I work with come from under-privileged families and mediocre or below average high schools. I was afraid of demanding too much of my students.

What I was really doing, was making excuses for them because of their backgrounds, which was a mistake! I needed to stop feeling sorry for my students and their circumstances and begin focusing on what they can accomplish given the opportunity, mentoring, and proper support. This is something I knew I could do.  I realized that I had no control over my students’ socio-economic conditions, but I could control the learning environment in my classroom and make it a place where students could discover their potential and thrive.

I initially set the bar low. I didn’t expect too much of my students, so they reciprocated and produced mediocre work. Needless to say, I was disappointed with the quality of the work the students were producing, and I’d felt as though I had failed them. I learned that when you set the bar low, all that you can truly expect from students is crappy work. I also learned that it was unfair of me to assume my students were incapable of higher standards due to their backgrounds.

And that, was when a light bulb finally lit up in my head, and I quickly learned my lesson and adapted.  I began increasing the rigor of my curriculum and began raising the bar.

Something unexpected happened when I did that. It didn’t matter how high I set the bar; my students always rose up to the challenge, and they either met or exceeded the expectations I had set for them. The quality of their work dramatically increased, and the students and I were both impressed with the results. That’s when another light bulb went on!

I began collecting the best assignments, portfolios, or projects submitted to me, and I would share them as samples with new students. I would tell my new students their job was to outperform the samples that I am sharing with them. I would show my new students samples and then outline what made the projects great and what could have been done to make them even better.

The result was outstanding. I was blown away by what my new students were producing. The work they were producing was comparable if not better than some of the things that I and my classmates had produced in Switzerland.

I suppose the moral of this story is this:

Well, I hope you found this post useful. If you did, I’d be grateful if you’d help spread the word by sharing this with friends or colleagues on Twitter, Google+, LinkedIn, or Facebook.

Dr. Fawaz Al-Malood is a college administrator, author, blogger, YouTuber, and podcaster. He holds a doctorate in education management from the University of South Africa, a MBA from Western Governors University, a MS in Management and Leadership from Western Governors University, a bachelors in Hotel, Restaurant, and Tourism Administration, and a Swiss Diploma in Hotel Management from the Hotel Institute Montreux. He is the Founder of FacultyWorkshop.com a blog dedicated to sharing successful strategies on: teaching, productivity, and professional development for college educators.

How To Avoid Group Work Complaints: 4 Tips To Follow!